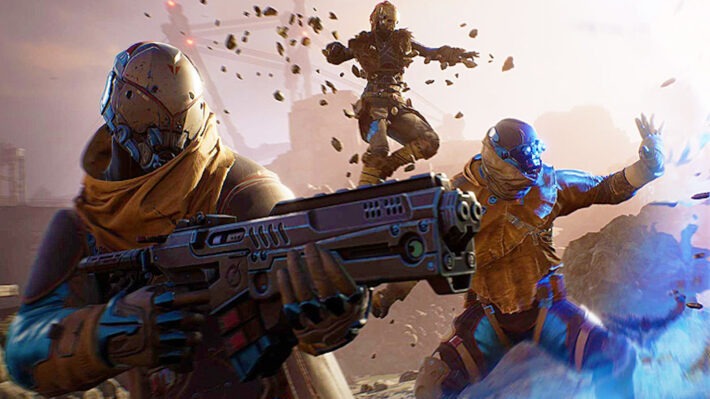 Outriders is here! It’s been a week since the release of this highly-anticipated 3rd person looter-shooter from People Can Fly. Although I haven’t reached the end game content yet, here are some of my initial impressions of the game.

Looter-shooters are generally known for their fast-paced actions and heart-pumping soundtracks. But Outriders doesn’t only have that – it also has a cohesive story that ties everything together.

You play as the titular character who survived a mysterious storm that killed nearly all your comrades as you descend upon Enoch. After 30 years of being in cryosleep, you wake up to find the once beautiful Enoch is now filled with desperation and fear.

As you follow the mysterious signal across Enoch, you’ll fight warring factions, bandits, and murderous native species. By exploring the town hubs, you’ll meet plenty of interesting characters with vast dialogue trees and side quests that give you an insight into life on this dog-eat-dog planet.

It’s very tempting to race through the main storyline to the end, but we assure you that the journey, in the case of Outriders, matters more than the destination.

Given how hyped Outriders is, many players want to just jump into the game and have fun, which might work against Outriders’ favor.

The prologue is beautifully made, but many players find it too long and one-note. The dialogues and the story can also come across as cheesy and try-hard. Personally, I don’t have much of an issue with it, but I can see how bloodthirsty players just want to dive right into the blood bath.

Another issue with a story-driven looter-shooter is how often Outriders cuts to black and enters a short cutscene. To be fair, a lot of those cutscenes are captivating, but some of them could have been done through conversation to avoid disrupting the gameplay.

The gameplay is where Outriders truly shine.

At first glance, Outriders might seem like a typical cover shooter game. But instead, it rewards aggressive gameplay with interesting perks within the classes.

The healing system is the best example to demonstrate this. When I was playing as a Trickster, I had to overcome my instincts to run when I’m low HP. But since I heal by killing enemies around me, I have to get close and personal to not die.

This unique gameplay translates to the rest of the classes. Every class in Outriders brings something unique to the table. With three distinct specializations within each class and the ability to reset your skill tree for free, you can switch up your playstyle every once in a while.

Because of these skills, combat is very interesting in Outriders. You have to juggle between your anomaly-granted superpowers and your weapons at the same time, which can take a bit of getting used to. But when you get the hang of it, combat is fluid and dynamic, making you feel like a real superhero.

Another thing that Outriders excelled at is giving you an almost unlimited power fantasy within the game. The crafting aspect of the game is extremely robust – if you can imagine it, you can probably craft it. With the powerful weapons you get along the way, you can make the best builds or disassemble them for special mods.

Not only that, but you can also get set bonuses that tilt the game in your favor. Add that to mods and the right combination of skills, you’ll quickly become undefeatable and annihilate everything in your path.

Although each zone feels just big (and punishing enough), the level design is not the best. The flow of the map feels a bit choppy and compartmentalized, which makes it feel less cramped.

Clearing each zone feels a bit like clearing the levels and proceeding to the next zone. You have to defeat the enemies unique to the zone, do an action, and enter a cutscene. After a while, it feels a bit samey and repetitive.

Many players have also expressed concern over the end game content since only 15 timed dungeons were planned at the initial release. Although you can change your character and play the campaign again or party up and beat the dungeons, there’s only so much replaying you can do until boredom sets in.

For starters, there’s the infinite enemy spawn. Not only that, but the ads are also tanky AF with high damage. By the time you clear a mob, the second wave has already started, making this a monumental task.

Then, you get to the boss and promptly realize that it’s a bullet sponge. Even if you just aim for the boss’ weak points, landing a crit isn’t a guarantee. Killing bosses and mobs feel like it could take forever, which is why it’s a good thing the combat is so well thought out.

In a nutshell, the enemy design of Outriders has the HP and firepower to match the brutal and bloodthirsty nature of the world ten times over. Personally, I found it fun and challenging, but it could put off someone who only enjoys casual shooting.

Unfortunately, Outriders have been plagued by a lot of performance issues like interrupted server connections and authentication issues since its release. But to be fair, given how hyped up the game was, these issues were bound to happen.

Besides that, it also has some glitches and bugs that might ruin the gaming experience. Some players reported that their inventory disappears and reappears after doing an Expedition. Cross-platform matchmaking is also a bit iffy with long wait times and glitching enemies.

The upside is that the dev team is being very transparent with the player base by keeping the players in the loop with fixes and updates.

Outriders is a one-of-a-kind looter-shooter that rivals older and more established titles with its captivating story and interesting gameplay. It isn’t without its problems, but it does show a great deal of promise – once the bugs and performance issues are fixed.