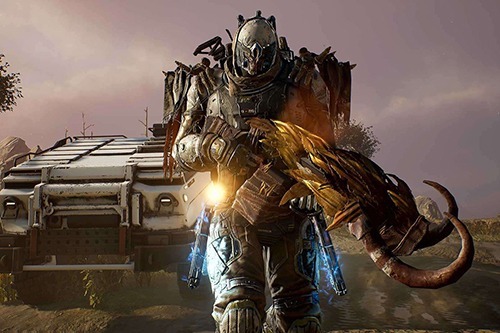 Are you ready to wreak havoc across the world of Enoch with the best Outriders Devastator build?

Known as the beefy sponge in Outriders, the Devastator proudly takes up the tank role among the four main classes in Outriders.

With this class, you’ll get up close and personal with your foes, absorbing attacks and dishing out powerful hits. With a variety of sets to choose from, the Devastator has the potential to deal devastating damage with the right set of skills and weapons.

Before we start, are you interested in playing other classes as well? Be sure to check out our latest Trickster Build set if you’d rather play the teleportation king of Outriders.

Waiting to build your Devastator set in Outriders? Here it is:

For this definitive Outriders guide, you’ll learn how to utilize the Devastator’s unmatched close-range prowess and capitalize on his reliable sturdiness.

Let’s begin with his skill tree.

Once you reach level 5 in Outriders, you get to branch your build out from three skill trees. These skill trees affect your build’s strengths in various ways.

For the Devastator, he unlocks the following three skills:

Among the three, we believe that the Vanquisher is the best class choice. While the other two stand good on their own, few factors distinguish the Vanquisher as better than the rest.

The Warden is great for sustainability, but it leaves out one thing. The Warden Devastator build lacks the much-needed strength to beat the range of enemies scattered across Enoch.

The Seismic Shifter can work once you have the right gear, but you can’t guarantee it with the tricky loot system. And if you do, it may take a considerably long time to find your preferred weapon. Your hours-filled grind could have been spent on tinkering with our favorite class option: Vanquisher.

What makes this build so great? The Vanquisher build for the Devastator packs a loaded punch to any of Enoch’s creatures. It focuses on creating the highest damage output possible. And among the three, it’s the best skill tree to amplify your build’s weapon power.

You unlock nodes by spending points that you gain as you progress through the game. To give you a glimpse, here’s five of the 25 available nodes available to the Vanquisher build:

The common theme of upgrades is constant weapon damage output gains and faster times to mow down enemies.

With the right Vanquisher build, you’d also need great weapons and shields to power through enemies at full force.

Since our main focus is on capitalizing on the Devastator’s damage threshold, your skills should be the shining light of your build. But of course, you shouldn’t neglect his survivability and utility either.

Here are the skills that are great for the Devastator, and a short description of what they do:

With this build, you can crush opponents while having an amazing means of sustain with Reflect Bullets.

How it works: First, you should set up the barrier by playing Reflect Bullets in the middle of battle. You might take a hit or two, but you’ll live. Once you’ve done that, pounce with Tremor and Gravity Leap for a slew of damage that’ll send your opponents flying. Here’s the best part. If some enemies are left alive, the barrier will dissipate and deal damage to them, finishing them off with a final blow.

It’s pure strategy, topped with a beautiful and flashy finisher.

For the Outriders Devastator, you would benefit from weapons that’s strong and boasts a fast reload speed. This is to prevent any downtime during combat. With his frequent close-range engagements, he’d need to save precious time from reloading his weapons.

You can find these weapons as rewards for completing Expeditions and Quests. Legendary weapons are the hardest kind to find in Outriders.

Here are some weapons that work great for the Devastator:

From the weapons above, or with any other great weapon alternatives, here are some great Outriders weapon mods to blast through Enoch’s monsters.

There are a plethora of other great weapon mods that can sufficiently arm you against greater and stronger foes. But for the main campaign, the selection above is more than enough to annihilate strong enemies with the Devastator.

Crafting the right gear and having the right armor set is key to letting your Devastator build shine. For this build, we recommend the legendary Statue Set because of the inclusion of one main skill: Tremor.

When you use Tremor with Statue set armor, you double your Firepower and double Weapon Life Leech for you and your allies. This greatly increases your damage output, making you an unstoppable force with a respectable degree of both durable bulk and strong attacks.

Grab your Outriders copy now on PC with Steam, PS4, PS5, Xbox One, and Xbox Series.