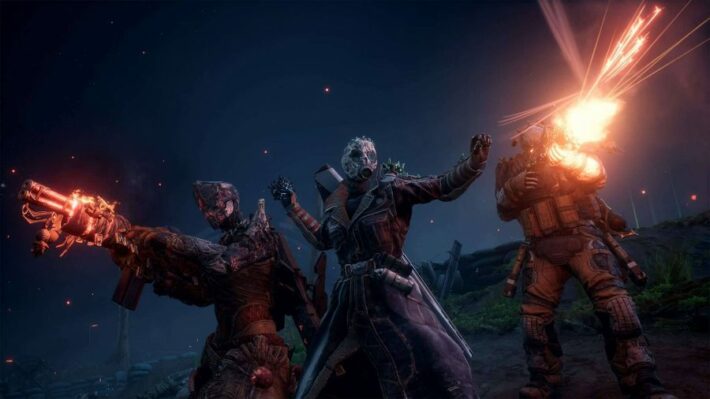 Are you curious about learning how to unlock this Outriders game mode? And what happens once you do?

If yes, stick around. We’ll give you a detailed and comprehensive guide on all you need to know about Outriders Expedition.

What are Expeditions? How do I unlock this game mode?

Expeditions are post-game timed challenges you unlock once you beat the main campaign. In Expeditions, you accomplish three main objectives for each mission:

Goal. The goal is to complete missions as fast as possible on the highest tier (difficulty) level and get better loot along the way.

Solo and Co-Op Experience. You get to explore solo or team up with your friends to face Enoch challenges and missions, and once you complete them, you get to unlock a post-game currency called Drop Pod Resources.

Drop Pod Resources. These are a type of currency that are dropped from Drop Pods. You can build and collect new gear with this form of currency, making you stronger as you tread forward to more difficult challenges in this game mode. Tiago can also exchange them for items and other resources.

Progression. But the interesting thing is you don’t progress by merely killing enemies. You progress by completing and defeating the highest expedition challenge tier.

How do I unlock the Expeditions game mode?

Beat the final mission in the main campaign.  Without diving into spoiler territory, you can easily tell you have unlocked Expeditions since it acts as an epilogue to the main narrative.

Each player can have vastly different experiences before unlocking this game mode. If you breezed past the main campaign, you can unlock the Expeditions game mode in as fast as 10 hours. You may also need to grind a little bit to increase your World Tier and get better gear.

If you took your time and increased your World Tier as you played through the main game, you can be looking at 30 hours before you reach Expeditions.

It totally depends on your playstyle, and there’s nothing wrong with either direction.

How Difficult is Expeditions?

The difficulty curve of Outriders Expeditions is noticeably more difficult than main campaign missions. It’s locked until the post-game for a reason.

It’s recommended to do some extra grinding before you embark on Outriders Expeditions. This endgame mode uses the Challenge Tier progression system instead of the World Tier system.

The difficulty level starts at Level 31 (Challenge Tier 1). So if you’re hovering below that level, consider doubling back and clearing some side quests to level up. By doing so, you could even unlock some new gear to make defeating Enoch’s monsters more manageable.

But either way, starting a mission in Expeditions even if you’re under-leveled wouldn’t hurt. If you’re blessed with a good build, then you could easily blast through enemies despite being a few levels below the recommended benchmark.

What’s in the Expeditions Menu?

In the Expedition overworld, you get to see a screen of two types of locations: places you can go to, and places that are grayed out and locked.

To unlock these grayed-out maps, you have to climb higher Challenge tier levels by beating the beginner missions. Once you have a couple of levels under your belt, some missions you previously unlocked become inaccessible. This discourages players from repeating maps and honing in on a loot farm.

To circumvent this, play an available mission, pass or fail it, and it will rotate what maps become available to you. As you continue playing these missions, this increases your Outriders expedition’s Challenge Tier.

This adds a sense of randomness in the postgame – making things fun, fresh, and exciting after each mission. But many serious grinders would find this system more irritating than necessary.

How Many Expeditions Are There?

From the Outriders’ Camp, players can choose one out of 14 Expedition destinations. You are given access to three missions at the beginning of Expeditions.

Then, the remaining 11 you unlock as you climb the ladder and increase your Challenge Tier. This includes:

Does Your Tier Level Matter in Outriders?

Yes; it’s needed to unlock certain missions. Here are the missions that you’ll unlock as you reach a certain tier threshold.

SPOILER WARNING: This segment will contain end-game spoilers. Read at your own discretion.

To unlock The Eye of the Storm, you’re required to expend 40,000 Drop Pod Resources, making it incredibly difficult to get.

How it starts. You start the sequence once you meet Channa, who finds herself having a disturbing vision about the permanent storm amassing on the horizon. There, once you set foot to undertake Channa’s request, you will end up facing Yagak — the leader of the Ferals — in a final battle.

To put it in perspective, completing low Challenge Tier missions net you around 20-30 Drop Pod Resources. Higher Challenge Tier resources have higher Drop Pod rates, but it’ll not be easy to get to this point, that’s for sure.