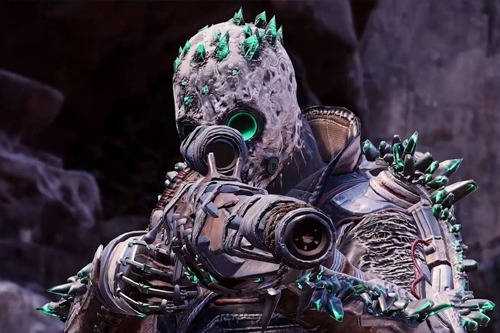 Are you itching to create the best Technomancer build to defeat hostile creatures scattered across Enoch?

The Technomancer is one of the most versatile of the classes you can play in Outriders. It’s a long-range support specialist that has the power to heal their teammates, something specific to this class only.

Aside from healing, it also uses machines and gadgets from the ground to create turrets. These turrets fire projectile weapons and inflict status conditions to enemies, like Freeze and Toxic.

If you’re interested in learning about the other Outriders classes instead, you can learn more about them such as the Trickster, who’s playstyle fits a sneaky ninja rather than a cunning engineer.

Ready to see the Technomancer build? Here it is:

As you achieve level 5 in Outriders, you get to choose your class’s preferred Skill Tree. For the Technomancer, the skill trees you can unlock play to his unique Gadget abilities and special healing powers. These are:

While all of these classes can shine with the right gear and weapon combination, we favor one of them over the rest: Pestilence. This is due to a couple of reasons.

For the Tech Shaman, players who play in co-op mode will absolutely love your presence. That’s because there’s a lot of value in healing in Outriders, especially in the thick of combat. But in solo campaigns, there’s rarely any use for this increased healing potential. The increased gadget output is nice too, but you’re better off improving another skill tree instead.

The Demolisher is a slightly less potent alternative to the Pestilence. The trade-off is an increased gadget damage output, which this build can live without. While having that perk would make Cryo Turret and Cold Snap stronger, you have more versatility and power focusing on adding damage output instead.

And that leaves us with Pestilence. When focusing your points towards building this skill tree, you increase the damage output of your Technomancer’s weapons. But that’s not all you get. With this build, you also have the choice to increase your toxin damage, making Blighted Rounds and Blighted Turret more terrifying damage dealers for your enemies.

If you’re looking to build the best Techomancer build to beat the solo campaign in Outriders, branch down the Pestilence skill tree.

For Pestilence traits, you unlock a unique set of abilities and bonuses from the skill tree. Here are some if its specializations:

The common theme of the Technomancer Pestilence builds is its damage output increase and other neat utility bonuses that makes using him easier.

Even if you’re away from the heart of the action, picking enemies from long-range is a crucial role to your success in the game. It’s best to equip yourself with the right weapons and shields to give you ample resources to win missions and quests in Outriders.

Technomancer is one of the most powerful classes in the game, and that’s all because of one skill he employs. It’s Blighted Rounds. While the majority of your playtime will more often than not be focused on capitalizing this skill, Technomancer has a lot of great skills to choose from that’ll also help him shine in combat.

Here are the skills that allow your Technomancer build to go on full rampage mode on Outriders enemies:

As mentioned earlier, the star of this build is Blighted Rounds. It’s the strongest skill in the game right now, arguably. Aside from that, Blighted Turret can help set up great crowd control solutions with its automated weapon fire as well. To top it off, Cold Snap restricts enemy movement from battle, allowing you to hide and take a breather once the situation gets too heated.

The best Technomancer weapon has to be the Amber Vault.  It’s a legendary weapon classified as a double gun that has the following perks:

Its special bonuses also include: Armor Pierce, Healing Received, and Close Range Damage. Aside from its cracking firepower and break-neck RPM, it also benefits greatly with the following mods:

If you can’t find this legendary weapon, there are many great long-range sniper rifles that carry tons of damage potential too.

The Technomancer’s versatility grants it access to many mods that work great regardless of the build’s purpose. Nonetheless, here are some great weapon mods that work specifically for this build:

With the combination of these mods and weapons, you’ll turn your Technomancer into a battlefield beast. Turret and Cold Snap help tremendously when dealing with crowds, and you’ll also be equipped to better deal with enemies with Toxic Lead and Blighted Rounds combo. Overall, it’s a well-rounded build that can pierce through enemies.

Now that you’ve got most of the weapons covered, don’t forget the armor that allows the Technomancer to take a couple of hits from worthy foes.

We recommend the Borealis Monarch set. By having a 3-part bonus, you gain a 10% increase in weapon damage on Frozen enemies. This pairs amazing with the mods and skills, namely the Ice Component mod and Blighted Rounds combo.

If you’re in co-op mode, your allies also gain a 90% critical damage increase for 8 seconds after you trigger Cold Snap in the game.

Grab your Outriders copy now on PC with Steam, PS4, PS5, Xbox One, and Xbox Series.