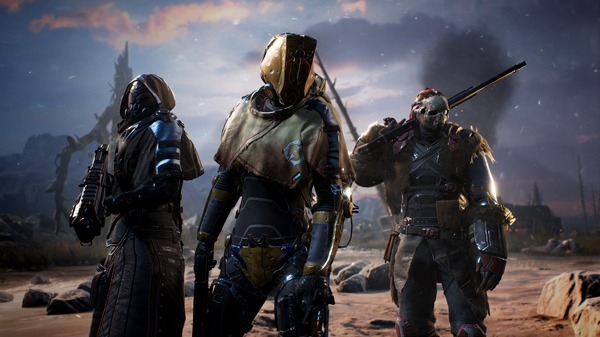 If you don’t know which class to choose in Outriders, you’ve come to the right place.

In this Outrider’s newbie guide, we will show you the mechanics of the four playable characters available in the game. You’re locked into picking only one of the four Outriders classes at the start — so it’s important to understand the strengths and weaknesses of each character.

What are the four classes in Outriders?

These are the four Outriders classes: The Devastator, The Pyromancer, The Technomancer, and The Trickster. Each class caters to different playstyles and have abilities that affect their performance differently during combat. These classes specifically differ in their skills trees, class traits, healing mechanics, and specialized gear.

And within the skill trees, these classes are further categorized into three more sub-roles to fit your preferred playstyle.

Whether you prefer to teleport and flee using time and space, or diving headfirst into the fray, there’s bound to be a character that will make your game of Outriders a blast.

Let’s take a look at each of these classes in-depth.

The Trickster: The Hit and Run DPS

The Trickster is a mobile character that can manipulate time and space to weave in and out of combat. They’re DPS-focused with ample amounts of crowd-control abilities. Their toolkit allows them to excel in close gunfights, and in a pinch, they can return back to cover without a trace.

The Trickster has class trees that can branch out in three ways. The first is the Master of Space build — which improves your mobility and works well in close-range combat. There’s also the Harbinger, which improves shield regeneration and damage mitigation. And finally, the Assassin build is your quintessential Trickster DPS-dealing machine — with skills that increase your damage output and skill leeching off enemies. They also have a healing ability that rewards them by increasing HP and Shields when they kill enemies in close range.

The skills of the Trickster allows it to dish out damage in high bursts. Temporal Slice deals damage and interrupts enemies when slowed, which makes mods like Slasher (activates skill twice before cooldown) and Cut Loose (reduces the cooldown by 20%) great for sustained high damage builds.

Another great skill we like is Borrowed Time. This utility skill allows you to mark a location in a nearby area and returns you to it again once you recast the skill. This can grant you “double takes” once the enemies get too dangerous and you need a quick way out.

If you want a greater look in detail at the character’s skills and abilities, read more on the Trickster here.

The Pyromancer: The Spellcasting Fire Wizard

No other class commands fire better than the Pyromancer. This character is a mid-range class that fits the fire mage archetype — with a plethora of skills to prove it. This damage-dealing spellcaster utilizes skills that have Damage Over Time and Area of Effect to scorch enemies to ashes.

The Pyromancer’s three branches complement unique parts of their kit. Ash Breaker focuses on rendering enemies immobile and gunning them down. Fire Storm focuses on igniting enemies and increasing longevity with defensive bonuses. Tempest makes the Pyroamncer an explosive powerhouse  — with enhanced focus on dealing brutal damage outputs. Their healing mechanic also activates once an enemy they marked with their skill dies during combat.

For the skills, Heatwave creates a fiery wave that leaves any enemies burning in its wake. It pairs well with the Tidal Wave mod which allows for a second recast without a cooldown effect, on top of debuffing enemies.

Thermal Bomb is another cool skill that lets you target an enemy to inflict damage, Ignite, and Interrupt them. If an enemy dies under the effects of Thermal Bomb, the enemy will explode and deal damage to enemies in a small radius.

Read more on the different skills and abilities of the Pyromancer if you want a closer look at this class. Spoiler warning: It will be fire.

The Devastator: The Tanky Brawler

The Devastator takes on the role of the tank among the four classes, with earth and gravity magic up his arsenal. With this character, you’ll be jumping straight into the fray, soaking and dealing copious amounts of damage to enemies. This class specializes in Damage Mitigation, Immobilization, and Area of Effect damage. The Devastator recovers health as you kill enemies from very close proximity to you.

For the class trees, the Vanquisher rewards close-range combat and grants buffs on shotguns and rifles. The Warden provides defensive buffs and increases your survivability in combat.

Seismic Shifter improves your damage-over-time abilities, which is good for a mid-range build.

Let’s look at the skills. Reflect Bullets stop bullets and reflect them back after time; Impale shoots up earth spikes to interrupt and damage enemies; and Endless Mass creates a stone that attracts enemies and explodes after time, then dealing heavy damage in that radius. Pairing strong skills like Endless Mass and Gravity Jump to deal crushing damage to your opponents is one of our favorite pasttimes.

Alternatively, mods can also increase the power of some of the Devastator’s strong skills. For instance, Ground Crush and Bloody Crush can boost Earthquake’s and Gravity Leap’s damage output respectively.

For the early game, many of the Devastator’s skills rely on damage mitigation rather than dealing hefty damage. So plan your build accordingly and give this tank a shot!

The Technomancer: The Savvy Engineer

The Technomancer prefers picking off enemies and supporting allies from afar. It is the only character that can heal its allies and place gadgets on the land, branding it as a hybrid of sorts. Aside from that, its skills also contain Ice and Poison abilities, which is unique only to the Technomancer. This class specializes in Crowd Control, Damage Over Time, and Area of Effect damage.

This character has three class trees. Improving on Pestilence increases the Damage Over Time effect with guns like long-range sniper rifles. Tech Shaman improves your support abilities, like your Turrets and Healing effects. The Demolisher allows you to inflict Toxic to enemies who damage you with Melee attacks.

The Technomancer has many skills in its arsenal. Scrapnel is the earliest learnable skill of The Technomancer, which throws a shrapnel bomb that deals damage and interrupts enemies. A mod that goes great with Scrapnel is More Traps, which gives you another charge of the skill.

Pain Launcher is an AoE skill that the Technomancer learns at Level 4 that sends a barrage of missiles at a targeted point in the map. Rain of Pain is a mod that removes a huge chunk of time from the cooldown of this skill – which is ideal for intense combat situations.

Give this gadget-savvy class a shot and learn the Technomancer’s skills and abilities with our Technomancer entry.

Which Outriders Class Should I Pick First?

Let’s get one thing out of the way: you can’t pick an obvious winner among the four classes. They all specialize in different modes of combat that may appeal to one person and not the other.

Nonetheless, we have our favorites. The Devastator gives you the bulk that the other classes don’t have. Pair it up with good mods – and you got yourself a force to be reckoned with. If you want to be on your toes at all times, the Trickster is another class we’d recommend for fast-paced action and flashy gameplay.