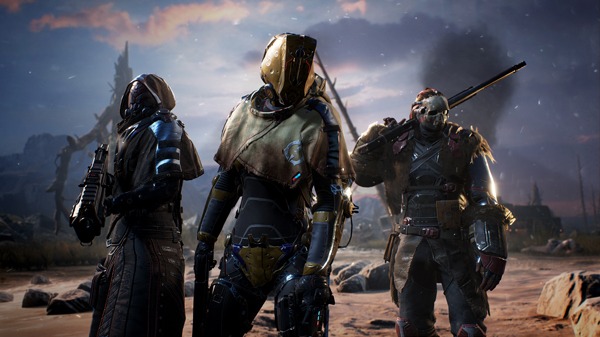 In Outriders, even though cover s the first thing they teach you how to do in the start of the game, Outriders is really not a game about cover. Outriders is almost the opposite of a cover and shoot game, it is actively built to reward an aggressive, fast-paced style of play.

You see, every class has perks. This includes your healing perk. Two of the classes, the Devastator and the Trickster have a perk that lets them regain HP based on enemies that are killed near them. The Pyromancer and the Technomancer also have similar perks that allow them to recover HP to enemies that they damage.

This means that in order to stay alive as one of the melee classes, you will need to get up-close and personal with the enemy, and kill them in melee range, or at least close to it. This is important, because the game is rather hectic, and there is always a sniper taking pot shots at you, several grenades to dodge and other mechanics which make it difficult to hide behind cover for a long time slowly sniping down enemies.

Plus, with the other abilities that the classes get to play with, getting up close and personal is absolutely worth the risk. As long as you are consistently killing enemies around you, you should stay topped up with whatever class you are playing.

It does take a bit of time to get used to, especially if, like me, you are more inclined to play stealth attack and dodge games, like I played in Cyberpunk 2077. I usually prefer this hit and run style of play, and more of Ghost Recon-style stealth gameplay, but when I was confronted with the enemies and the terrain of Outriders, I was forced out of my comfort-zone with many, many grenades that do enough damage to preclude you from the sniper lifestyle you may normally enjoy.

So, get out there and get a good shotgun, and start wreaking havoc on the enemies! They will reward you with a fast-paced shooter experience much closer to the gameplay of Doom Eternal that we all love. The only thing I will say, that while you do jump into a horde of enemies at once, and have to play a crazed close combat warrior, you are still squishy and won’t be able to tank enemies forever without getting some kills. You really do need the HP regen from enemies dying near you to survive, so don’t jump in thinking you can absorb their fire without a plan to take them down one by one.

Also, while the Technomancer will only heal from damage they deal to enemies (ie: only damage you inflict will heal you) the Devastator and the Trickster will benefit from any enemy that dies in close-proximity. So, in theory in a multiplayer environment, you could build your Devastator to be a full tank without worrying too much about damage, and allow your team to kill the enemies around you, and you would still get the benefit of the healing. This could be a useful strategy in the end-game where you can build your Devastator to absorb as much damage as possible and rely on your team to focus on DPS.