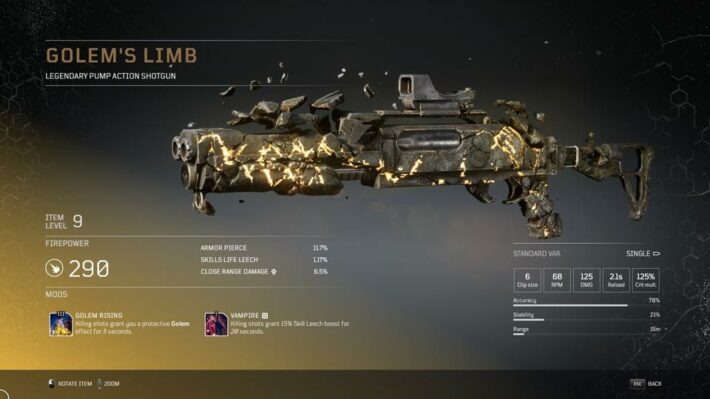 Have you ever wondered what’s the most efficient way to get legendary items in Outriders? If you have, read on.

There are two methods that you can follow to get legendary loot fast in Outriders. They both require you to get in combat: either by fighting a miniboss or fighting a captain.

But first, the basics. Defeating an enemy in the game grants you loot in the form of Outriders gear. And, just in case you were wondering, if you play the game in the demo and get legendary loot there, you can carry over your progress from the demo to the full game.

Each of these gear has its own level of rarity: ranging from common, unusual, rare, epic, and legendary. You can use the dropped gear to aid you during combat, and if you’re lucky, you can stumble upon legendary loot that is more powerful than the other loot tiers.

What does Legendary Loot in Outriders Do?

The rule of thumb is the higher the rarity of the gear, the more additional buffs and attributes that the gear contains. This power creep comes in the form of better armor penetration, extra critical damage, or increased durability. Aside from that, epic and legendary loot can also come with mods and enhancement bonuses that can greatly modify your character’s playstyle. Do keep in mind, however, that items with the same mods don’t stack.

How to Get Outriders Legendary Weapons?

Before grinding for legendary weapons, you’ll need to play in a World Tier higher than what you started with. World Tiers are essentially Outriders difficulty levels classified into multiple tiers. And the way you unlock the higher tiers is by leveling up.

In World Tier 1-3, the legendary drop rates are fixed at 0%. You won’t get any legendaries at the start of your journey if you don’t increase your World Tier. You’ll get a higher legendary drop chance (10% increase) once you reach World Tier 4, then the drop rate jumps even higher to +25% at World Tier 5.

World Tier 5 is the ideal tier to start farming loot regularly, but you can climb to higher World Tiers to increase your favor even more.

Once you’ve hit a good World Tier, you can farm loot through one of two ways: by fighting a captain or fighting a boss.

How to get the mission

One of the ways we recommend grinding for legendaries is by replaying the mission Payback. It’s a short side quest that doesn’t take too much time to complete. You get access to this mission by going to Rift Town and by activating one of the early story missions. This is the one that deals with Gauss, the Outriders first boss battle.

By venturing off the side of the path near the Crossroads Warp Flag in this vision, you can find an injured soldier Audrey Storm. Talk to her, and she will give you access to the mission Payback.

Getting to the captain

Payback features a lot of snipers behind enemy lines, so make sure you’re prepared to deal with them. If you’re a Pyromancer or Technomancer, it’s best to have a sniper of your own with you to beat them from long-range. If you’re playing the Devastator or Trickster, you’re better off equipping close-combat, skill-based abilities (like Gravity Leap and Hunt the Prey, respectively) to get a leg up against the sniper’s positions. As long as you play to your class’s strengths, you should make it out fine.

The captain battle and the reward

While killing enemies in the mission gives you a small chance of loot, the final miniboss Captain Reiner is who you should be gunning down. Unlike the other bosses, Captain Reiner always has the same set of abilities. Once you deal with the starting enemies during his sequence, you can predict his movements and use that to your advantage.

Once you defeat the captain, go back to Audrey to turn in the quest. You will have a chance to get a legendary item as your reward. Just rinse and repeat the mission until you get more legendaries.

There are other side quests and missions like Terra Infirma that achieve the same thing. But for the fastest way to farm legendary loot in Outriders, defeating Reiner is usually preferred.

If you didn’t, restart the mission by clicking “Select Story Point”. You will end up replaying the game with your first set of gear. Just beat Gauss (again), open the chest, and rinse and repeat until you get a legendary drop.

Just a note, Gauss’s abilities don’t change (just like Reiner’s), which makes it easier for you to fight him again. Find ways to avoid getting hit by his skills like Discharge Mine and Lightning Storm. The former places a detonatable mine on the battlefield while the latter creates a surge of energy that chases you around. Once you understand his mechanics, beating Gauss won’t be too difficult. And in no time, acquiring legendary Outriders loot would be a breeze too.