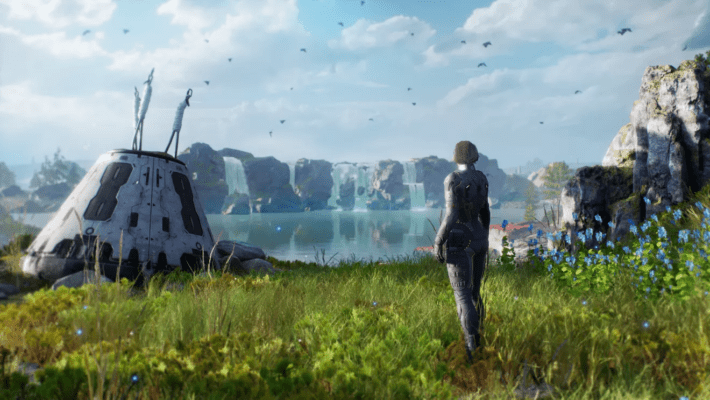 Outriders is one of the most highly-anticipated games to release in the first quarter of 2021. Developed by People Can Fly (the masterminds behind Bulletstorm and Gears of Wars), this co-op third-person RPG is packed with a compelling story and interesting gameplay set in the beautiful but dangerous world of Enoch.

Outriders have often been compared to popular looter-shooters like Destiny 2 and Mass Effect. Although that’s not entirely wrong, there are other aspects of the game that remind us of story-driven RPGs like Skyrim.

Flexible Story And Freedom of Choice

As part of the first group of human settlers, you enter Enoch, a lush-green planet suitable for human habitation, to try to make it into Earth Version II after humanity destroyed the first one.

Your story truly starts after 30 years, when you wake up from cryosleep to find that you’re one of the last survivors of your group. Enoch had become brutal and downright bloodthirsty due to the same mysterious anomaly that crashed your ship, with native flora and fauna evolving into homicidal species built to decimate humans.

It was clear that the demo has only shown us a fraction of what Outriders really is. In Outriders, the freedom of choice is the thread that binds its world together. This open-world setup is reminiscent of Skyrim – you can pretty much go anywhere and do anything after you complete the prologue. You can explore town hubs and collect side quests or bounties. You can talk to sketchy characters to learn more about Enoch. Or you can plunge into battle straightaway – the choice is yours.

Outriders features a drop-in/drop-out multiplayer system that allows you to move forward by yourself or with a party of up to three.

Like any looter-shooter action RPG games, you’ll spend most of your time fighting and killing things.

Outriders uses a world-level system that automatically adapts to your level and abilities. The game is as ruthless as the in-game Enoch – it’s just punishing enough for that sweet, sweet satisfaction at the end when you beat the boss. In fact, the more aggressive you play, the more rewards you’d get.

Similar to Destiny 2, you choose a class to play when you begin your adventure. But in Outriders, you play as one of four classes instead of three – the devastator, trickster, technomancer, and pyromancer. Each class has different play styles and abilities that can be used in party roles when playing co-op.

This co-op shooter takes a Skyrim-esque turn when it comes to class-specific abilities. Depending on the class you choose, you can wield certain powers. Pyromancers can shoot fire out of their hands for maximum AOE damage. Technomancers can conjure lethal weapons and enhance their damage while battling, and trickers can teleport away from danger.

That’s not all. As you level up, you can put all your skill points in one of three available specializations per class. There aren’t any skill-specific ultimates, but it does give you passives and buffs that enhance your play style. For example, with the technomancer ‘pestilence’ specialization, you do higher toxic damage, increase health regeneration, and more.

Although it doesn’t have as much gear as Destiny 2, Outriders is full of weapons and armor that you can level up to maximize your build. Crafting is an essential part of Outriders as dissembling a rare weapon with a particular mod unlocks it for your weapons. Getting the right build is difficult, but it makes victory all the sweeter at the end.

Overall, the combat style is the perfect blend of Destiny 2 and Skyrim. With fluid and dynamic movements, it’s easy to switch between your magic abilities and the weapon you’re using to deal greater damage. This gameplay also opens up many tactical opportunities to deal with each unique encounter.

Hurray, you’ve made it to the end! Now what?

To be fair, no one has made it to the end yet since the game hasn’t actually been released. But it sounds very promising according to the developers.

Outsiders is released to be a complete game – that means no updates or DLCs in the foreseeable future. This is a departure from many endless loot-based games like Destiny 2 that add new worlds and content every once in a while.

Instead, Outriders will have about 40 to 50 hours worth of campaign content from the get-go. After wrapping the main questline, you can go on 14 brand-new Expeditions to maximize your build and get valuable loot. Like the rest of the game, you can do it solo or in a party.

When all 14 are done, you get to go on one final post-game mission to face the final boss of the game. You can also reset your skill tree for free to try other skills, or up the difficulty of the world to increase the level cap of your weapons.

Personally, I like that Outriders release a complete game right off the bat. IMO, too many games were released prematurely with the safety net of paid DLCs and quality-of-life updates disguised as extra content.

Outriders have many things that players love in Destiny 2 – a devastatingly beautiful hellscape of a world, fast-paced combat, interesting class abilities, as well as mods and powerful weapons.

In combination with open-world exploration and story-driven quests from RPGs like Skyrim, the Outriders world is full of depth and complexity. The spell-casting abilities also enhance the combat system and add another layer of tactical consideration when playing.

Overall, Outriders blends the best parts of both games into one hell of an experience. If you’re passionate about immersive storylines, explosive action, and versatile gameplay, don’t miss out on the worldwide release of Outriders on April 1st, 2021.